In St. Paul Minnesota, two delivery men were making their rounds when they noticed a man hanging on the outside of a fence on an interstate overpass. They knew immediately what the man was planning so they pulled over and talked to the man. When nothing worked, one of the beer delivery men finally convinced him off the ledge when he offered him a cold brew to talk things over.

Kwame Anderson and Jason Gabel were the two delivery men on their route when they noticed the man on the ledge. They both jumped out of the truck to talk to the guy. “Hey, what are you doing?” Anderson asked the man. “If you’re thinking of jumping, you don’t have to jump.”

The man told Anderson, “You don’t know me, you don’t care. Why are you trying to save me?” But Anderson replied that they wouldn’t be there if they didn’t care. When Anderson realized that the man was suicidal, he called 911, but he also knew he had to keep the conversation going. For the next hour, the pair of delivery men talked to the guy. Anderson found out they had similar upbringings and they could relate to each other. 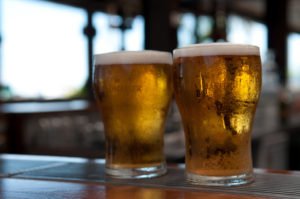 “If you come down from there, do you want to get a drink with me and talk about what’s going on?” said Anderson. Then he ran to his truck and grabbed a case of cold beer and said “I have a pack of Coors Light for you. Follow me’.” Sadly, the man never got that drink. Just as he was getting off the bridge, paramedics took him to the hospital for evaluation. But everyone involved credits the two delivery men (and a cold can of beer) for saving his life.