Beachgoers Team up with Firefighters to Help Stranded Manatees

In the Gulf of Mexico, beachgoers and local firefighters have banded together to help a group of manatees that were stranded on the beach. The volunteers worked together to return the marine mammals into the water before they suffocated. Local beachgoers who were enjoying a day at the beach joined the rescue efforts of the Clearwater Fire and Rescue Department to save the stranded creatures. 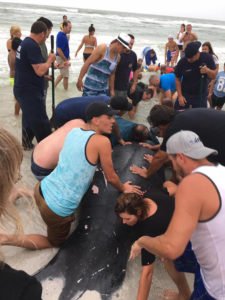 According to the report, as many as seven manatees had beached themselves at the site in front of the Palm Pavilion. By the time the fire department and the firefighters had arrived, only three remained stranded on the beaches. The volunteers and the fire firefighters worked carefully and slowly as they helped the manatees get back into the water. One theory as to why these manatees were stranded has to do with the shallow water and waves that moved the currents during the afternoon tide. The current could have pushed the herd of manatees into the beach. 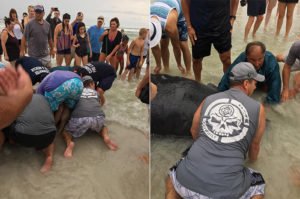 “Our crew from Station 46 had an unusual call this afternoon — helping stranded manatees back into the water from the beach,” the Clearwater Fire and Rescue Department wrote on their social media account. Aside from the many volunteers at the beach, the rescue operations were also led by firefighters LT. Bob Quinn, Pete Lopez, and Mike Aleksa. They were also assisted by the Fire Medics Mike Hutto and Robbie Winer. By the end of the afternoon, the volunteers Â were able to carry and push the manatees back in the water.