In San Diego, a senior women’s basketball team has made headlines for their excellent play. The San Diego Splash has won two titles and they are looking for their third. It is also notable to know that the members of the team are over 80 years old. That’s because they compete in the San Diego Senior Women’s Basketball Association where the players have to be over 80 to join. But the Splash are also the most senior team in the league, with two players over 90 years old. 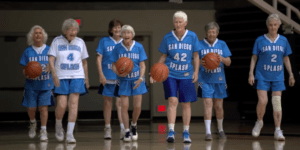 The senior women’s league plays three-on-three basketball with 30 minute games on a half court. The Splash have nine women on the roster including Grace Larson and Meg Skinner, who are both 91 years old. But don’t let their age fool you, these women are competitive and get the job done. Most of the players on the team have been playing basketball for decades. For example, 87-year old Fran Styles has been playing basketball for 20 years, while Skinner has been playing for 24 years. And their commitment to the game is just like any other athlete. They have even suffered numerous injuries because of the sport. But that hasn’t stopped these women from returning to the court each time. 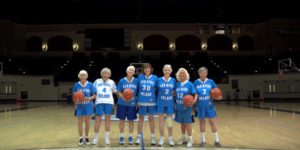 The Splash has recently been featured in a special aired by ESPNW. The short feature is called Splash Sisters (a nod to the team name, but also a pun on the “Splash Brothers” of the NBA Champion Golden State Warriors). The video shows how these senior citizens have prospered in their league and the bond that has formed between these teammates. The special also shows the “friendship, a sisterhood, a family” that these ladies have found with their team and league.