Earlier this week, a nine foot alligator caught some residents off guard as it tried to enter their residential apartment in Florida. A resident of College Pines Apartment complex in Cocoa was shocked to find the large reptile at the doorstep trying to entire their apartment. According to reports, the large alligator did not want to be dislodged from the doorstep. 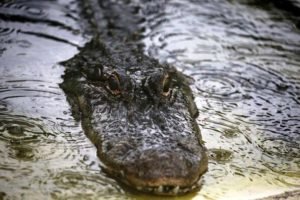 When the authorities were called to take away the large alligator, it fought against being pulled and tugged away and it had to be rolled over and tied down before being taken away by animal trappers. The alligator was near a doorway when animal trappers arrived at the scene and the reptile went deeper into the porch. The trappers were from the Florida Fish and Wildlife Conservation Commission (FWC). 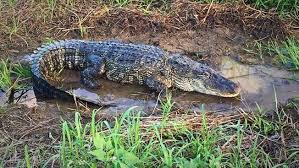 “I was standing at the door and saw a man looking at me, waving down and I looked, I saw an alligator, so I ran back in the house,” said resident Liz Mare. Another resident, Drew Masers, said that he spotted the alligator and ran up the stairs. According to wildlife officers, alligators can roam from one body of water to another, and spotting them in odd places is very common, especially in places like Florida with several nearby bodies of water

“We haven’t had much of a winter, so it’s kind of already happening. They’re already up and moving. If you see one in the wild, don’t feed them or mess with them,” said Frank Rub of the FWC. He also advised that anyone who sees an alligator in populated areas should call for local law enforcement or the FWC immediately.