Hillary Harris from Eau Claire, Wisconsin, was adopted as a baby. She doesn’t know much about her biological family, only that she had a sister. She found out her sister’s name from her adoption file; Dawn Johnson. But even with that name, she couldn’t find her. She spent years searching the internet for her sister but to no avail. 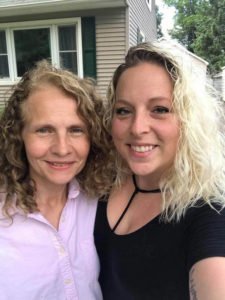 Then one day, a new couple moved next door. The woman’s name was Dawn, and she was from Greenwood, Wisconsin, the place where Harris’ sister grew up, according to the adoption file.Â  “My husband and me joked for a few weeks that she was my sister but we didn’t know her last name,” Harris said. But then one day Harris saw Dawn’s last name on a delivery that arrived for her. It was Dawn Johnson. 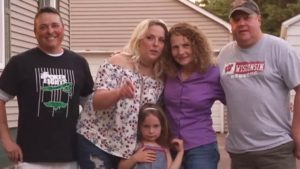 “One day she got a delivery of shingles for her roof and it was addressed to Dawn Johnson. I began to shake. It was such an intense moment. It was late at night, but I finally got the courage to text her and ask her who her dad was.” The 50-uear old Dawn was raised by her stepfather and first met her birth father when she was 18. She had never thought about other siblings that she didn’t know about. That night, they talked on the phone the two reunited sisters cried for hours.

“When I finally met Dawn, it was the missing piece to my puzzle,” Harris said. “She fills so many voids in our lives – she’s like a big sister and mother to me.” In the past year, the two have gotten close and are now inseparable.