Alleen Cooper started writing letters to her son during the Vietnam War, when he was deployed by the army to serve there. Despite suffering from post traumatic stress disorder, her son Larry survived the war and came home. But she has not stopped writing since them. Cooper has been writing letters to overseas military members, even those that she does not personally know. By her estimate, Cooper has written close to 7,000 letters in more than 40 years. 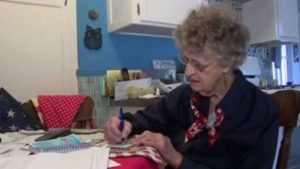 Recently, Cooper was able to correspond to a Marine that she had previously written to. Staff Sgt Chris Cantos was in a remote area in Afghanistan when he received a letter from Cooper. According to Cantos, there was not internet on the remote station and the only contact he had was from the letter that copper sent. 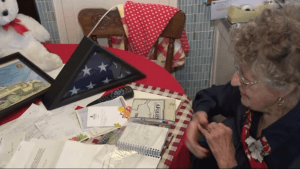 “She would always send us clippings and jokes. She would tell us about her day,” said Cantos

Cooper says she started writing letters to provide comfort for the soldiers that are deployed overseas. All of her letters are at least four pages long and she makes sure that each letter is unique and new. Cooper has been rewarded for her work, and many soldiers have sent her commendations and trinkets from their overseas bases. One such trinket is an American flag from an actual army outpost. Despite the advent of technology such as the internet, Cooper still believes in the art of writing. And although she has started to feel more and more tired when she writes, Cooper says she will continue to write as long as she can.