On Panama Beach, a family is thankful to be alive after around 80 people on the beach formed a human chain to save them from a rip current. The entire rescue was photographed by several bystanders on the beach. It showed a long line that was formed by a group of people to reach a family of nine that were just barely hanging on to stay above water. The rip current was so strong that it took the help of all the people just to get the entire family safely on shore. 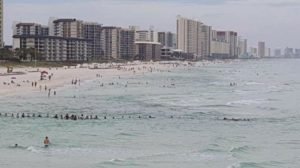 Roberta Ursrey was in the beach with her family, which included her husband, her mother, her children and a few nephews. They were at the beach enjoying the sun and the surf for the weekend. Then suddenly she heard two of her sons screaming. She rushed to the water and tried to save them, but she was also gripped by the current. One by one, family members tried to help but they were also taken by the strong rip current. 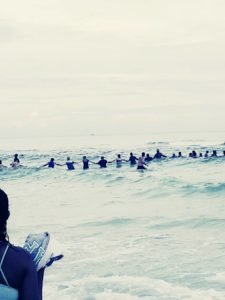 “I honestly thought I was going to lose my family that day,” says Roberta Ursrey, “It was like, ‘Oh God, this is how I’m going.'” That’s when a beachgoer by the name of Jessica Simmons went in after the family but asked others to connect with her in a chain. Simmons was a strong swimmer and she knew she could reach them, but she did not want to get caught up in the current either. It took a little more than 80 people to reach the Ursrey family, who were dragged farther and farther away to sea. But eventually they reached the family and they were able to pull them back to the beach.

“It was the most remarkable thing to see,” says Simmons “These people who don’t even know each other and they trust each other that much to get them to safety.”